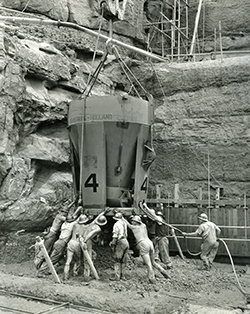 The threat of drought has been a feature of Greater Sydney's history and landscape and our resilience to dry periods is reliant on one of the largest domestic water supplies in the world.

Warragamba Dam, creating Lake Burragorang was built at a time when the city had just 1.5 million inhabitants but has supported our growth toward and beyond 5 million people.

Warragamba's water supply history was mired in false starts, good intentions and untaken chances, with references to the possibility of a dam there dating to the middle of the 19th Century.

As Greater Sydney grew, water security became been a recurring theme for our city. The need for a reliable supply became increasingly evident in the 1930s. The worst drought then on record began in 1932 and lasted for eight years, with dam reserves falling to 12.5 per cent despite harsh restrictions.

In 1940, the Warragamba Emergency Scheme was commissioned.  While rain fell in 1942, and Australia’s involvement in World War II complicated federal funding and attention, construction began in 1946.

The dam took 12 years to build and has underpinned Sydney’s transformation into a global city on the edge of the planet’s driest inhabited continent. But Warragamba’s construction, and the foresight that gave it capacity to quench the needs of a city of 5 million, has proved a resounding success and a priceless investment at a time of risk and uncertainty.