18 Mar 2018
News | Today A Metropolis of Three Cities – the Greater Sydney Region Plan has been released. This plan, along with Transport for NSW’s Future Transport 2056 and Infrastructure NSW’s State Infrastructure Strategy 2018-36 will bring to life the vision of Greater Sydney as a vibrant and sustainable metropolis of the Eastern Harbour City, Central River City and Western Parkland City.

The City Deal sets the investment foundation for the Western Parkland City to become a global city, enriched by its heritage and connected to the world.

Over the next 20 years the Western Sydney City Deal will drive the creation of the Western Parkland City. 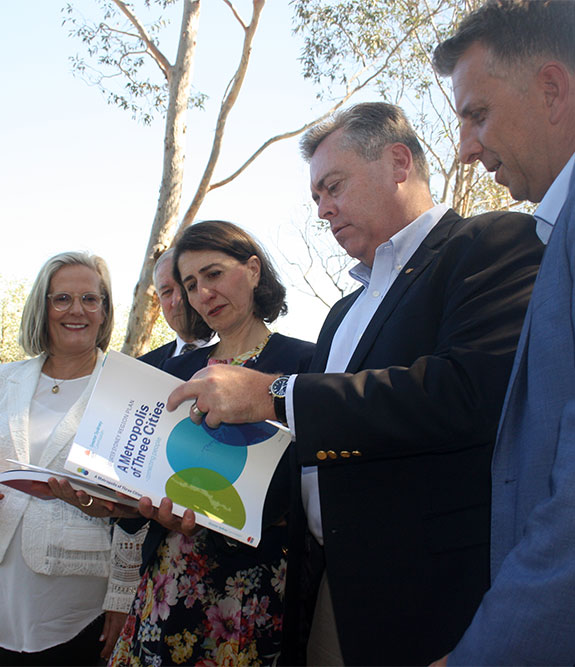 The Commission has also released the final five District Plans that support implementation of A Metropolis of Three Cities at the local level.

For the first time Greater Sydney now has land use, transport and infrastructure plans that have been developed concurrently.

In developing its Plans, over the last two years the Commission has listened to a wide range of stakeholders including the community, local government, peak bodies and industry. What we have heard loud and clear is that as Greater Sydney grows we must recognise the things people love about their City and align the delivery of homes, transport, jobs, open space and infrastructure. Acting on this feedback, the Commission has structured its Plans around four core themes - infrastructure and collaboration, liveability, productivity and sustainability.

Importantly, these Plans will not sit on the shelf - the Commission is already working with councils, government, stakeholders, community and industry to implement them and achieve quality outcomes for the people of our city.

We would like to thank everyone who helped us develop our Plans – whether by participating in an engagement event, providing feedback or making a submission. Together we have created a bright future for Greater Sydney.