"The Western Parkland City will be the equal of any Australian city for high quality university education.

"World class educational opportunities will be a pillar of the Western Parkland City, alongside the aerotropolis, the airport and well-planned and highly liveable communities.

"This will help address the historic imbalance of jobs and education across Greater Sydney, which leaves 158,000 people each day making long commutes from the West to the Central and Eastern cities. By growing the opportunities in the West, this is an investment in intergenerational equity for current and future generations with jobs, education, hospitals, services and recreation within 30 minutes of where people live," she said.

Chief Coordinator for the Western City, Geoff Roberts, said the announcement was further evidence the vision of a Metropolis of Three Cities was becoming a reality and builds on what already makes Western Sydney a great place to live.

"We are seeing a major shift in opportunities to Greater Sydney's west, supported by all three levels of government. Outstanding education, jobs, infrastructure, technology and great places to live will define the Western Parkland City," Mr Roberts said.

"Only 16 per cent of Greater Sydney's university places currently exist outside of the Eastern City, even though a third of our university students live in the Central and Western Cities.

"The Western Parkland City will be the envy of many for its health and education precincts, educational opportunities and forward-looking innovation and productivity focus, bounded by a unique and world heritage-listed natural landscape," Mr Roberts said. 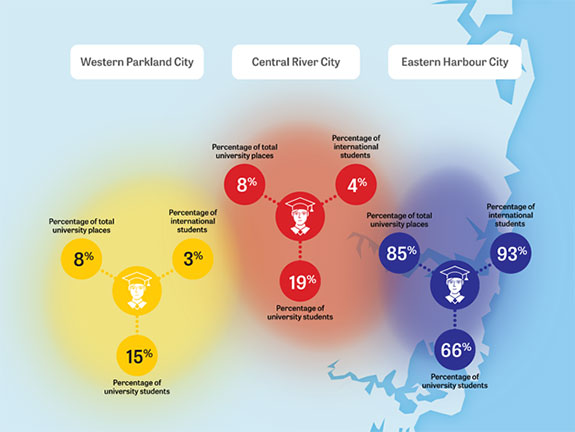