The City Deal sets the investment foundation for the Western Parkland City to become a global city, enriched by its heritage and connected to the world.

Over the next 20 years the Western Sydney City Deal will drive the creation of the Western Parkland City. 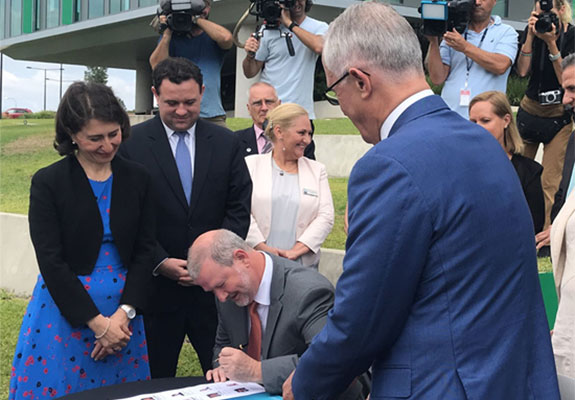 Global investment and innovation will thrive in the Badgerys Creek Aerotropolis. Smart jobs will spread out through the growing education, health and industry precincts and employment hubs in Liverpool, Penrith and Campbelltown. The region’s strategic centres – Richmond, Windsor, St Marys, Narellan, Katoomba, Fairfield and Leppington – will benefit from new jobs.

People will live close to skilled jobs and services, where they can enjoy the great outdoor lifestyle, open spaces and amenity long into the future.

This is Western Sydney’s time and the City Deal lays the foundation for its transformation and delivery of key elements of the Australian Government’s Smart Cities Plan, the Greater Sydney Commission’s Western City District Plan, and the Future Transport 2056 strategy.

Highlights of the Western Sydney City Deal include:

The Western Sydney City Deal document can be found here.

A clear, joined up and enduring governance arrangement will focus on delivering the Western Parkland City. This includes clear involvement of all tiers of government, involvement of local communities through their councils and a consistent and innovative relationship with industry.

The Greater Sydney Commission will have a role in the implementation of the Deal and the coordination of land use and infrastructure.

An Implementation Plan, will be published in 2018, clearly showing how the City Deal will be delivered and progress measured for each commitment.