Biodiversity is protected, urban bushland and remnant vegetation is enhanced

The Sydney Basin bioregion is one of the most biodiverse in Australia. Its biodiversity is protected through a range of State and Commonwealth legislation. Over 5,200 square kilometres of land in the Greater Sydney Region, containing many areas of high environmental value, are protected in national parks and reserves primarily in the Protected Natural Area (refer to Figure 49).

With the expansion of the urban footprint, and major transport infrastructure like the Outer Sydney Orbital and the Western Sydney Airport, there will be continuing demand for offset sites where biodiversity can be protected.

Providing incentives for landowners in the Metropolitan Rural Area to protect and enhance the environmental values of their land and connect fragmented areas of bushland can deliver better outcomes for biodiversity and greater opportunities to create biodiversity offsets (refer to Objective 29).

Urban bushland, particularly bushland on public land, will be protected and managed so that it continues to provide clean air and water, cooler urban environments and local habitat. Managing the impacts of urban development at the urbanbushland interface can help reduce the degradation of bushland caused by edge-effect impacts, including stormwater runoff, weeds, domestic pets and unmanaged or informal recreation trails.

In the Western Parkland City, urban bushland including degraded or remnant vegetation should be considered for incorporation into the planning and design of new neighbourhoods, and where possible be maintained on public land as part of the Greater Sydney Green Grid and for urban tree canopy.

Across Greater Sydney, councils are working together to map opportunities to restore and reconnect areas of habitat in established urban areas. Selected species of trees for parks and street planting in targeted areas supports the movement of wildlife and help strengthen connections between areas of habitat. 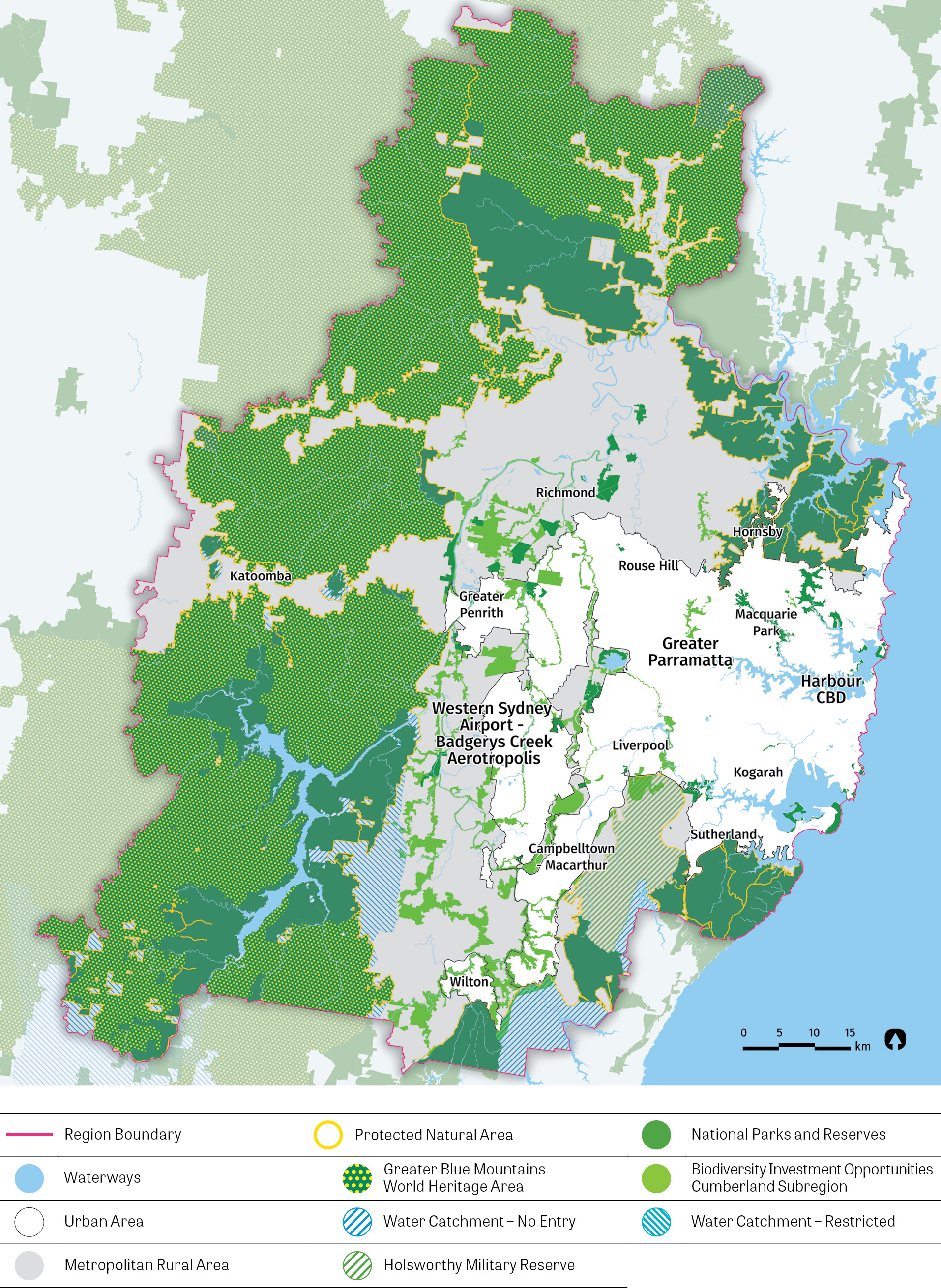 Download this image gsrp_figure_49.png (format PNG / 4 MB)
Related government initiatives:
You are here:
A Metropolis of Three Cities
Chapter:
Sustainability
Direction:
A city in its landscape
Favourite this section

Download this plan in PDF (16.01 MB)
Jump to previous section Previous section A cool and green parkland city in the South Creek corridor
Back to top
Jump to next section Next section Scenic and cultural landscapes are protected