The Greater Sydney Green Grid connects communities to the landscape. It is a long-term vision for a network of high quality green areas – from regional parks to local parks and playgrounds – that connect centres, public transport and public spaces to green infrastructure and landscape features. Within the public realm it includes enhanced waterway corridors, transport routes, suburban streets, footpaths and cycleways.

The Greater Sydney Green Grid offers a network of green spaces that is far greater than the sum of its parts. It will keep the region cool, encourage healthy lifestyles, support walking and cycling, provide better access to open spaces, enhance bushland and support ecological resilience. Planning and delivery of the green grid will be influenced by the ways people move through places and the multiple roles of green grid corridors.

The Greater Sydney Green Grid will be delivered incrementally over decades, as opportunities and connections are refined and funded. Councils and the NSW Government will continue to use a range of land use planning tools, funding programs such as the Metropolitan Greenspace Program and transport initiatives to deliver the Greater Sydney Green Grid.

In the Western Parkland City the green grid will be integral to the creation of cool and green neighbourhoods and a continuous parkland corridor along South Creek that is an attractive place for recreation, retains water in the landscape and helps manage stormwater and flooding. The Western Parkland City’s green grid will connect to Western Sydney Parklands, areas of high environmental value and waterways in the nearby Metropolitan Rural Area, providing more viable areas of habitat and links to scenic rural landscapes. The Greater Sydney Green Grid will also provide walking and cycling access within, and to and from, the Western Parkland City.

Open space along the foreshores of beaches, harbours and bays of the Eastern Harbour City form the backbone of its green grid. The popular walking tracks along the coast and Sydney Harbour will be enhanced and complemented by improved connections through tree-lined streets and established urban parks, towards open space along coastal waterways, such as the Northern Beaches coastal lagoons, Cooks River and Georges River. 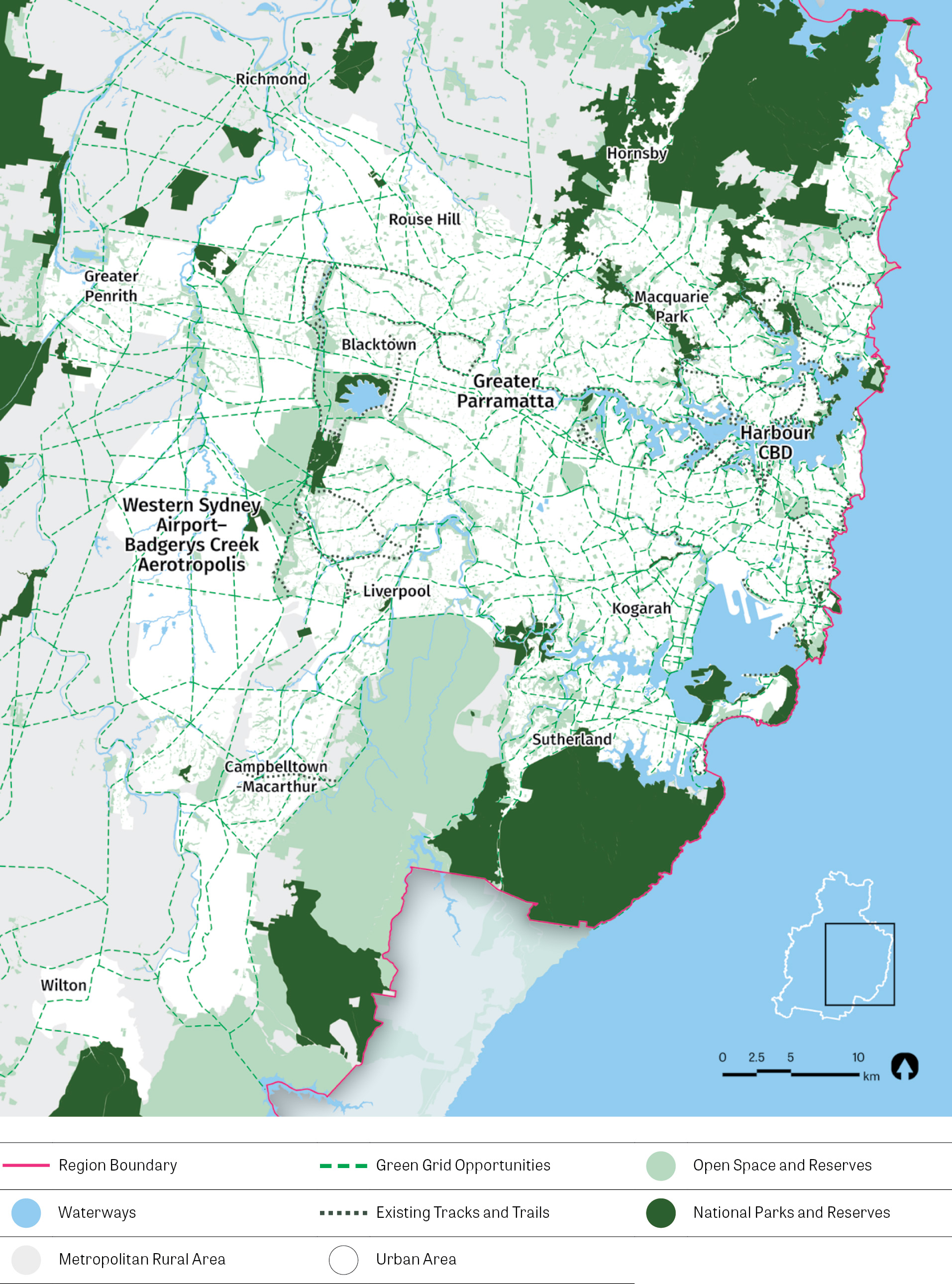 You are here:
A Metropolis of Three Cities
Chapter:
Sustainability
Direction:
A city in its landscape
Favourite this section