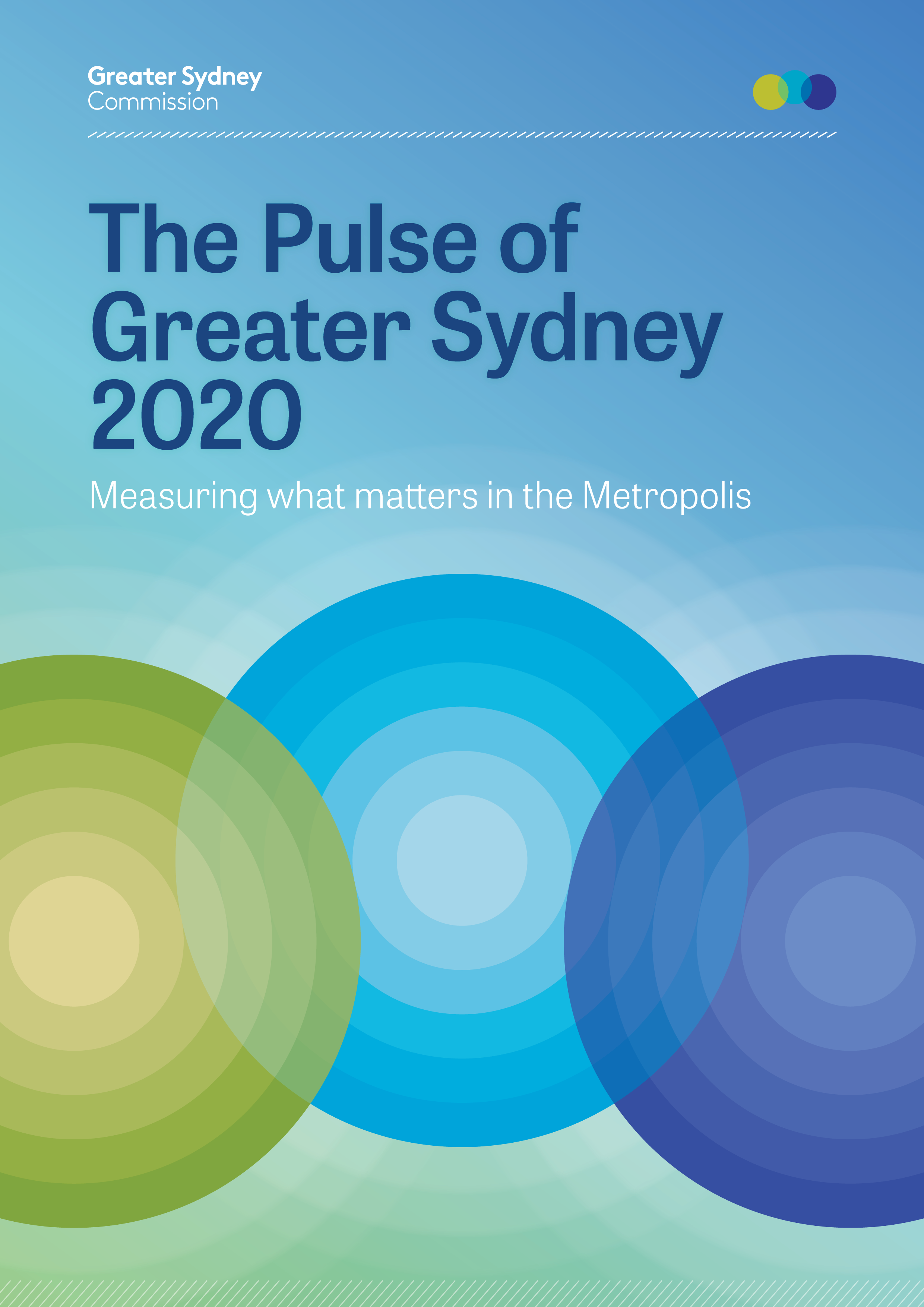 The Pulse of Greater Sydney 2020

The City Deal, signed on 4 March 2018, brings together the Australian and New South Wales governments and the eight local councils of the Western City District to deliver transformative change to the region over the next 20 years.

The new Western Parkland City will be one of Australia’s most connected cities. In an emerging 30-minute city, innovative public transport, aviation and digital infrastructure will bring residents closer to jobs, centres, education and the world.

Rail for the Western Parkland City - Stage 1 of Sydney Metro Western Sydney Airport was announced by the Commonwealth and NSW Governments on 1 June 2020. The $11 billion city-shaping project, from St Marys through to the new airport and the Western Sydney Aerotropolis, will provide a major economic stimulus for Western Sydney, creating more than 14,000 jobs during construction.

Rapid Buses and an Integrated transport program - Planning for the City Deal Rapid Bus Network is being expedited. A project team has been mobilised with a program developed. Co-design and engagement with councils in undertaking detailed route and network design has commenced.

Digital connectivity and smart technology - On 24 February 2020 the NSW Government launched its state-wide “Digital Twin”, a 3-D spatial database, starting with the Western Sydney growth areas. This will power faster and more cost-effective detailed planning work in Western Sydney as well as providing the platform for open spatial data across all levels of government.

The Western Parkland City will create 200,000 new jobs across a wide range of industries over the next 20 years. The Airport, Aerotropolis and metropolitan centres of Penrith, Liverpool and Campbelltown will attract infrastructure, investment and knowledge-intensive jobs, and the benefits will flow into health and education, retail, hospitality, and industrial activities that will power the City.

Creating high-value employment precincts - The Western Sydney Aerotropolis Plan was placed on public exhibition in December 2019, with rezoning of precincts finalised in September 2020. The draft Plan includes intended land-uses for six initial precincts, including the Aerotropolis Core, an Agribusiness Precinct and a Wianamatta- South Creek environmental and recreation Precinct.

Detailed precinct planning has been developed by the Western Sydney Planning Partnership and was placed on public exhibition in November 2020.

Investment and industry attraction - Working through the Western City & Aerotropolis Authority, the Government entered into 18 Memorandums of Understanding with multinational entities to establish a presence or provide input into designing the Aerotropolis.

Connecting residents to jobs - All NSW Government major infrastructure projects in the Western Parkland City will have employment and procurement targets. These targets are based on the Infrastructure Skills Legacy Program, with training and diversity targets for learning workers, apprentices, women in trade related work, Aboriginals, local workers, and those aged less than 25 years.

Residents of the Western Parkland City will have access to the best in education and skills training opportunities. A new university, schools and VET (vocational education and training) facilities will align with the high skilled businesses and industries of the Aerotropolis.

Education and skills - A temporary Skills Exchange by TAFE NSW was established on the airport construction site in late 2019 to provide local training for the workers needed to construct the airport and other major projects. Negotiations have commenced with WSA for longer term ongoing TAFE Skills Exchange arrangements.

Supporting education and jobs through Aerospace Partnerships - The NSW Government has been working to build on the Statement of Intent signed with the NUW Alliance (consisting of the University of Newcastle, University of NSW, University of Wollongong and Western Sydney University) in 2018 and create partnerships that will help prepare students for future job opportunities in the aerospace and aviation industries.

Three further Memorandums of Understanding (MOUs) have been signed with:

These partnerships and others will support the NSW Government to generate linkages between education and industry development, as well as pathways to high-quality jobs in the Aerotropolis. The NSW Government has also committed to building a new $79.6 million state of the art TAFE campus for Western Sydney.

The Western Parkland City has a unique landscape that is surrounded by protected natural assets. Its future neighbourhoods will be even more liveable and sustainable. Local project funding will create healthy and active communities that build on their strengths and support open spaces.

Amenity and liveability across the Western Parkland City - The announcement of the second and final round of the Western Sydney City Deal’s Liveability Program, was held in February 2019 with $40.2 million of funding to be spent across a range of projects including a new wave pool, sports field and performance space.

The $190 million Liveability Program was launched in late 2018 with co-contributions of $60 million each by the Australian and NSW Governments and $70 million collectively from the eight councils.

Supporting a Parkland City through an enhanced South Creek Corridor - The first stage of developing a strategy to protect and enhance the South Creek corridor has supported the mapping of the Wianamatta-South Creek Precinct in the Aerotropolis Plan. The Precinct will rejuvenate the Aerotropolis section of South Creek into a high-quality central green spine for amenity, recreation and environmental conservation.

Protect and preserve environmental assets and parkland character - The early works and main works contractors for the Herbarium at Mount Annan (Stage 1) - Western Sydney Centre of Innovation in Plant Sciences, with construction starting in August 2020.

Protecting the Environment and streamlining approvals - DPIE released the draft Cumberland Plain Conservation Plan for consultation in August 2020. The Plan aims to protect the biodiversity of the Cumberland Plain and support the delivery of new infrastructure and urban development.

Innovative approaches to planning for and delivering housing will ensure that growth is balanced with maintaining the local character of the Western Parkland City.

Local planning to support new and diverse housing - All Western Parkland Councils are preparing Local Housing Strategies and, and as part of the strategies, are required to show how they can meet an indicative draft range for 6–10 year housing targets (2021/22 2025/26).

A liveable approach to street design - The Western Sydney Planning Partnership has developed new Street Design Guidelines for adoption across the Western Parkland City. The guidelines include standards for different street types to maximise pedestrian access, cycleways, tree canopy, water in the landscape and, public transport, as well as better traffic flow on thoroughfares.

Aligning infrastructure to growth - Led by the Commission, NSW agencies, utilities providers and local councils are working together to implement Place-based Infrastructure Compacts (PICs) for the Western Parkland City. The first PIC is focusing on the Aerotropolis and the Greater Penrith to Eastern Creek areas and was released on public exhibition in November 2020.

The PICs will include infrastructure planning that aligns with projected population growth and will identify new infrastructure that will be needed, use of existing infrastructure, costs, funding sources, and how delivery will be staged over time.

The Australian, NSW and local governments will work together to support the growth, success and sustainability of the Western Parkland City

Enduring tri-government governance - March 2020 marked two years since the City Deal was signed by the Prime Minster, Premier and Mayors of the eight Western Parkland City Councils. The Governance framework implemented in 2018 has provided stability and focus over these two years and has been engineered to endure for years to come. The Western Sydney City Deal Delivery Office is hosted by the Commission and manages the Governance bodies overseeing the City Deal (Leadership Group and Implementation Board).

Performance Indicators and baseline metrics were included in the implementation plan. In 2020, the Delivery Office finalised an evaluation framework that will be used in the three-year review of the City Deal in 2021.